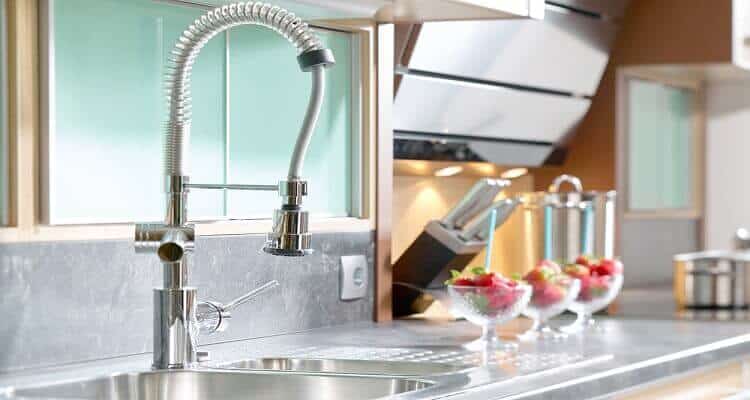 Usually, people don’t give much thought to the question “how does a kitchen faucet work?” until it is probably faulty. The fact is all faucets are not the same in their operations. The basic principle of water being released as a result of pressure difference seems to be the same for all.

However, the mechanism behind the delivery varies significantly from model to model. Usually, the main difference in the inner workings of a faucet is actually in the type of valves used. There are basically four types of valves used in kitchen faucets.

This is the simplest type of valve used in the kitchen faucet. A compression valve is made up of a screw stem which goes up and down when the screw is turned. There is a rubber washer at the base of the stem.

When the handle is turned in a counterclockwise direction, the stem with the rubber washer is raised out of the water inlet. Consequently, this allows water to flow into the faucet body and out the spout. Turning the handle in the opposite direction lowers the stem again. Thus, the water inlet is blocked to stop water flow.

Faucets with a ball valve have steel ball as the main component controlling the flow of water. This ball valve is designed with a network of grooves which are aligned with the cold and hot water inlets. They allow water flow to flow through when the handle is turned. In most cases, it is also possible to adjust the ball to control the flow rate and water temperature.

Cartridge valves have become more commonly used today compared to the ball or compression valves. The main component of faucets with a cartridge valve is a small cylinder usually made of brass or plastic. This cylinder has a network of channels through which water flows when the handle is pressed. Similarly, the channels also allow you to vary temperature and pressure.

In addition, cartridge valves also have an O-ring which seals the bottom of the cylinder and prevent leakages around the edges. They are quite versatile and can be used in both single and double handle configurations.

Ceramic disc valves have become widely popular today because they are sturdy and quite durable. Faucets with this type of valve have two rotating discs with channels that align when the handle is turned. This way they allow water to flow. Additionally, these discs can also control the flow rate and water temperature.

How do touchless kitchen faucets work?

Touchless kitchen faucets are the newest pieces of technology as far as kitchen faucet is concerned. While other types of faucets use a handle to start and control water flow, a touchless faucet allows you to start and stop water flow without even touching the faucet at all. Even though the touchless faucet still uses the valve system describe above, it is the way this valve is triggered that makes all the difference. The basic parts of the faucet include:

A touchless kitchen faucet has a sensor usually around the lip or at the base of the spout of the faucet. This presence-sensor automatically detects when a hand is present under the spout and turns the faucet on. In most cases, how this works is by using a small infrared light and a detector.

Thus when you bring your hands close to the lip of the spout, the infrared light bounces off your skin and hit the detector. This automatically triggers the valve on the faucet. Alternatively, other types of faucets use an ultrasonic field sensor which is triggered when you move your hand in the field.

As mentioned, a touchless faucet also has a valve as well. However, the type of valve used here is a solenoid valve which is operated based on electrical polarity. The valves which are rubber-like discs will remain closed until it gets a signal from the sensor. When this happens the valve is pulled open and water is allowed to flow.

Finally, a touchless kitchen faucet will need a power source (typically a dry cell battery or a low voltage AC transformer). Another variant of the touchless faucet is a touch-on faucet. These types of faucets are activated by touch sensors in the spout or handle to trigger or stop water flow. In addition, some of them also have manual modes.

It is important to understand how a kitchen faucet works. This will guide you while making a purchase. Similarly, the knowledge of how a faucet works will also come in handy when there is a fault in the system.

Scroll back to top
We use cookies to ensure that we give you the best experience on our website. If you continue to use this site we will assume that you are happy with it.Ok